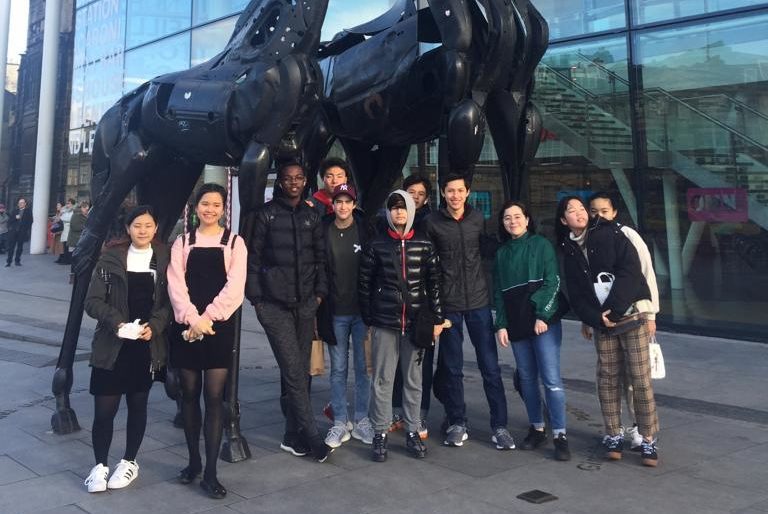 “We started our journey by mini-bus to Ashford International on Sunday 17th February.  It was a noisy drive as the students were all in high spirits looking forward to the week ahead. We boarded the 10:16am high speed train to Edinburgh Waverley, and the students busied themselves along the way by eating (a lot), chatting and texting – sometimes all at the same time! In no time at all we arrived at our destination – The Novotel which was situated on the outskirts of Edinburgh city centre.” Ms Rivett-Carnac

After checking in, the students were all pleased to find their rooms were spacious – they exceeded all expectations. “As we were all tired from the journey and had eaten along the way, we just settled for a “KFC” which was a convenient two minute walk from the hotel. The students then enjoyed a swim in the hotel pool and then relaxed in the steam room” Ms Rivett-Carnac.

A day-to-day diary of the events and memories told by the Guestling Lodge house staff:

The students had an early start as they had a booking to visit the Scottish Parliament. A short walk from Waverley Station took them to an impressive building where they were given a tour and an informative gallery talk. Afterwards the staff and students all headed up to The Royal Mile where they had lunch together and the students were given some free time. Mid-afternoon, they visited the Edinburgh Dungeons for ninety minutes of entertainment  “partly scary and definitely fun” where the students enjoyed seeing their house master/mistress put into the dock and tried for murder and then put into a cage. For dinner they visited a noodle bar before returning to the hotel via the local train.

After another hearty ‘all-you-can-eat’ breakfast, they arrived at The Murrayfield Rugby Stadium where they were given a guided tour which ended up on the pitch itself.  “The guide was excellent and made this interesting even for those of us who had no interest in rugby” Ms Rivett-Carnac.  After a good lunch, they had a walk around the Museum of Scotland which had something to interest everyone. “Free time was then given for the students to spend more of their parent’s hard-earned money before we met up for a Mexican dinner which had been voted the best option. The students had a late swim in the pool tonight” Ms Rivett-Carnac.

At 9.30am, the students congregated together for a leisurely breakfast comprising of several different courses.  “The only thing we had planned for the day was a theatre trip in the afternoon.   The students decided between themselves to have a quiet morning where we visited the shops around the hotel (TK MAX) Sports shops etc. and then had some free time in the city centre before arriving for the performance of “The Jersey Boys” musical which everyone seemed to enjoy.  Dinner tonight was Frankie & Bennys and then we travelled back to our hotel” Ms Rivett-Carnac.

“We had tickets today for the hop on & off sightseeing bus.  We were given headphones to enjoy the commentary as we were taken around the perimeter of the city centre. Afterwards, we got on and off at different points of interest.  We visited the grave of the legendary “ Greyfriars Bobby” and took in the view around the castle where the students took some good photos. The bus took us through Holyrood Park , giving us scenic views of Arthur’s Seat and watched as lots of people walked to the summit looking like small ants in the distance, however there was no surge of enthusiasm to climb it themselves. After a tiring day sightseeing, we had a dinner at The Hard Rock Café followed by a well-earned spell in the hotel’s leisure centre” Ms Rivett-Carnac.

“Today we had an interesting tour of The Royal Yacht Britannia. This was enjoyed to varying degrees by the students, and afterwards they enjoyed free time in the shopping centre to do shopping for the last time before we headed back.  The students then voted to visit Nando’s for their dinner which everyone really enjoyed judging by the amount of chicken consumed.   One of the good things about the hotel was that there was plenty of communal space with sofas, coffee machines etc. so that everyone could get together and socialise after their swim” Ms Rivett-Carnac.

“The return journey to school was a great pleasure as we were all ensconced in a First Class carriage being served drinks and nibbles at very short intervals. An agreement was made between everyone that should we partake in this Edinburgh trip again, then we will not settle for anything less than a First Class experience. Once at Ashford, we had our final dinner together at Wagamama’s and although we had had many excellent culinary experiences in Edinburgh, it was agreed that this was the best of all. The minibus got us back to Buckswood at 9.30 p.m. the students said their goodbyes and tiredly made their way back to their houses” Ms Rivett-Carnac.